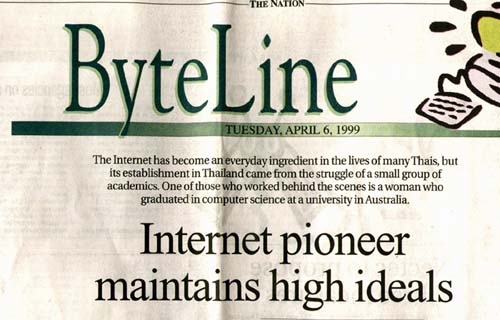 THE Internet has become an everyday ingredient in the lives of many Thais, but its establishment in Thailand came from the struggle of a small group of academics. One of those who worked behind the scenes is a woman who graduated in computer science at a university in Australia.

The birth of the Internet in Thailand 10 years ago was the result of efforts by a woman who graduated with the highest degree in computer science from the University of Melbourne.

Kanchana Kanchanasut was the first Thai to bring the exciting new way of communication -- electronic mail and the Internet -- to this country. She is one of a small group of academics who were behind the emergence of the country's revolutionary Internet network which is now in widespread use in Thai society.

Kanchana became familiar with electronic mail when she was a student in Australia during the last decade. Every day, she had to open her mailbox to check new assignments from her lecturers, and she used it to communicate with her colleagues.

''E-mail became a routine part of my life when I was studying there,'' said Kanchana.

At first, Kanchana did not think e-mail would have an influence on her life. Then she came back to Thailand in 1984, and found that part of her routine was lost. ''It was so difficult for me to communicate with my old friends and lecturers in Australia,'' she said. ''Thailand had no Internet connection, so I had to use a modem dialling through the Communications Authority of Thailand through an X.25 network to get mail from my mailbox at the university in Melbourne.''

''That initial system made the use of e-mail feasible in Thailand, allowing me and other AIT staff to communicate with others around the world across the network within a few seconds,'' she said.

As the first gateway, AIT also allowed lecturers at other universities in Thailand to request e-mail accounts.

The success of the first Internet gateway opened a new opportunity for Thai academics to experience knowledge that was running through cables. From her first attempt, by mid 1988, the country had its second Internet gateway, at Prince of Songkhla University. This gateway received assistance from a university in Australia to establish a network linked with the Internet network. Chulalongkorn University also used this link for Internet access.

These two initial Internet nodes became the model, encouraging all universities to set up their own connection to the Internet network. The network was developed until it became a system for academic institutions under the ThaiSarn network.

The Internet in the last decade has been something new in Thai society, she said. The initial user group was actually lecturers who graduated from abroad and had experience in using e-mail.

''In the early stages, the Internet was limited to academic circles because the use of it required users to have Unix knowledge while only two applications were used on the network -- e-mail and FTP or file transfer protocol.''

In 1991, the network was designed based on TCP/IP protocol, and new applications such as Telnet became available.

Three years later, there was a big change in Thai Internet circles. From being only an academic network, the Internet exploded into commercial use. Kanchana also saw this dramatic change.

She admitted that she felt confused during the transition period. She saw the network grow mostly in terms of profits, which was the opposite intention to that when the network was established.

''I had to take time to adjust to this change,'' she added.

In the old Net community, Kanchana saw people devoted to the Internet without any thought of profit, but when it became commercial, she said there were many more interests to be concerned about.

She agreed that the boom in commercial Internet use helped the network grow substantially and get encouragement from the government. New opportunities have been opened to Thai people to acquire new knowledge in a new way, something they've never had before. However, there are some people trying to abuse the network for their own purposes.

''The Internet is a two-edged sword,'' she said. ''The country needs to lead the younger generation in the right way, to deal with the Internet by establishing an awareness that to play the Internet is not just for fashion, but is a way to acquire and develop basic knowledge which will help the country's development.''

Thai children still have the misunderstanding that playing the Internet is partly for acquiring knowledge, but in fact, Kanchana said, it's no use if they just play and play without getting in-depth knowledge. ''They will not get anything from the network except superficial pleasure,'' she stressed.

''As part of the academic circle,'' she continued, ''I want to see more academics getting involved in research and development on Internet technology, while on the user side, I wish to see our youngsters use the Internet to acquire real knowledge to improve themselves rather than simply enjoying playing the Net day to day.''

She's now seriously conducting research and development on new Internet technology to improve the use of the Internet in Thailand. Internet via satellite and a study of the new IPv6 protocol are some of her projects.

''My research will come out as a foundation of knowledge which can be applied to the development of Internet technology in the future. This country needs this kind of knowledge,'' she said.

Her role in the Internet does not end at only this. As one who built the first Internet connection in Thailand, she's also the only one who received the authorisation to oversee domain name registration using ''.th'' in the country.

''This came from when I was setting up the first Internet gateway,'' she recalled. ''I submitted a proposal to InterNic, an organisation which oversees the assignment of domain name servers, to ask for an Internet address for the first AIT gateway. I received the name together with an assignment from InterNic giving me the right to oversee domain name server provision in Thailand.''

Kanchana has been the sole authorised registrar since 1988. She formed an informal group called Th-Nic to oversee the task five years ago, but now she intends to shift this responsibility to a new non-profit organisation which she planned to set up under the Foundation for Internet Research of Thailand.

''I expressed this idea two years ago at a meeting with local ISPs,'' she said. ''I saw that the DNS should not be operated by an individual now that commercial Internet is in widespread use since it's public property. I want to transfer my right to a proper organisation. That's why I proposed the idea of a new foundation.''

Apart from being the DNS registrar, Kanchana said the new foundation will also be a research centre to conduct research for the country. It will provide funding for researchers who want to conduct new Internet research to help develop the country's Internet circles.

Recently, Kanchana was appointed by an international Internet organisation, the Internet Corporation for Assigned Names and Numbers, to be on the Membership Advisory Committee. She is the only Thai who is on the international committee which was appointed from people around the world.

The development of the Internet in Thailand 1988 -- Asian Institute of Technology received a Unix-based workstation that was used as a server to establish an Internet connection, hooking up with the University of Melbourne and the United States. This was the first time the country had a connection gateway out of the country, opening the world of the Internet to Thailand. The main applications used on the network were e-mail and file transfer protocol.

1990 -- The Internet flourished in academic circles. There were many lecturers asking for e-mail accounts to help with their communications. Many universities had been encouraged to set up their own nodes linking with the Internet network.

1991 -- A conference related to the Internet was conducted among academic institutions. The first step of cooperation among Thai universities to set up the Internet network for academic purposes arose with the establishment of the Thainet network.

A new protocol for the Internet network under TCP/IP was also developed, allowing new applications such as Telnet to become available.

1992 -- Chulalongkorn University set up a new Internet gateway based on the new TCP/IP protocol. The gateway, linked with an Internet Service Provider in the United States, UUNet, was expected to be the core of the Thainet network. AIT also switched the link to CU's gateway.

1992 -- A few months later, the National Electronics and Computer Technology Centre set up its own Internet node, for academic purposes, under the ThaiSarn network. This network was eventually developed to be the country's academic Internet network. AIT also had a link to Thaisarn.

1994 -- There was a big change in Thai Internet circles when the Internet exploded into commercial use. The commercial Internet Service Providers were born and non-academic people began to have the opportunity to get access to the Internet.

Since then, the Internet has been developed in commercial ways, making the network grow rapidly. Today, it's expected that there are more than 100,000 people in Thailand with access to the Internet network. The figure will increase to 670,000 this year and 900,000 by 2000.